What can we learn from the WE scandal?

A whole mess has happened between the end of July and today. The Trudeau government got caught handing over a $900 million cookie jar to WE Charity in the middle of a pandemic and responded by replacing Finance Minister Bill Morneau, a guy most of us have probably never heard of, in favour of Deputy Prime Minister and former Foreign Affairs Minister Chrystia Freeland, a woman we’re all starting to hear an awful lot about. Then the Liberals turned the government off until September 23rd.

The general consensus is that this is a way to avoid the WE Scandal investigation and general bad vibes, but I dunno. It definitely seems like a coordinated move—Morneau’s resignation, Freeland’s appointment, and the proroguing happened within 48 hours—but I think there’s more to the Liberals’ strategy than just a deflection from controversy. We’re not just seeing the Liberals slip another punch from public opinion, they’re also working their way to the corner to tag in Freeland as their next leader. Morneau did his party duty by taking a hit for Trudeau, and his reward is support in a bid for Secretary-General of the Organisation for Economic Co-operation and Development (OECD). They’re also cycling Freeland through her next department after foreign affairs, where she helped build an imperialist puppet-gang called the Lima Group to fuck with South America in general and Venezuela in particular. Now she’ll learn how to pull a Chrétien when post-COVID austerity comes along so that we’re left unprepared for the next big hit from the climate crisis.

While these events might be a bummer, they do show us one of the Liberals’ greatest strengths: being so slippery they can keep sliding forwards even when they stumble.

It’s not a strength they’ve kept hidden. Despite promising electoral reform in Trudeau’s 2015 campaign, the Liberals tossed the idea away in 2017, citing a lack of public support, despite it being a major reason he won in the first place. Then in February 2019, we found out the Liberals pressured Jody Wilson-Raybould to help SNC-Lavalin avoid prosecution for bribery. Each time we found out the Liberals were lying, they kept on sliding until somehow we just seemed to stop caring. Each time we’re reminded the Liberals are corrupt, that they lie to our face then expect us to accept their apologies, we unfailingly find ourselves accepting.

The exception to this rule is the Wet’suwet’en solidarity protests in early 2020. When Trudeau did the expected and told the protesters to stop getting in the way of the oil industry, the protesters did the unexpected and continued their occupation of an arterial railway line. This action succeeded in securing an agreement that no future projects could ever be approved without consent from the Wet’suwet’en Nation’s hereditary chiefs. It’s not a total win—the Coastal GasLink project is still going forwards, and the government could eventually just break the agreement—but it is a rare instance of the Liberals finding themselves unable to slip away from their own broken promises and instead having to actually do something to satisfy the public.

So perhaps it’s better to say that the Liberals keep getting away with these scandals not because they’re slippery, but because we let them. They’ll perform theatrics that shift blame to scapegoats like Morneau, or prevent investigation through the Parliamentary legerdemain of prorogation, all the while preparing new cast members like Freeland to keep the show going, because they know we won’t do anything about it. When we settle for the symbolic hand-wringing apologies, Cabinet shuffling, and some performed shame, the Liberals are more or less invincible. But when our response is material—when we show our frustration by directly affecting the country’s ability to function—then we force the government’s response to be material as well.

Facing a grand total of four parliamentary committee investigations into government misconduct in the WE charity saga, Justin Trudeau followed a time-honored strategy, beloved by all Canadian Prime Ministers embroiled in scandal, and prorogued parliament on August 18 until September 23. Smelling blood (or at the very least, votes) the Bloc Quebecois leader Yves-Francois Blanchet had already threatened to force a confidence vote against the minority Liberal government this fall unless Bloc demands for the resignation of Trudeau, Bill Morneau and Katie Telford were met. The resignation of Morneau on August 17 means the Bloc can cross one name off their hit-list. But without the departure of Trudeau it’s unlikely this will make a difference, meaning, come September, the Liberals will most likely have to rely on NDP votes to avoid triggering a new election.

Jagmeet Singh has already laid out some demands he expects the Liberals to address if they want NDP support in the upcoming confidence vote: The first is a demand for $10 billion over 4 years for childcare provision and the second is a demand to extend CERB payouts and permanently increase the scope of the EI system. While there’s nothing wrong with these goals in themselves, their lack of ambition does suggest that the NDP doesn’t fully understand the leverage it currently possesses with the Liberals. The Bloc Quebecois have already said that nothing short of the departure of Trudeau would compel them to support a throne speech and the Conservatives, with their newly minted leader Erin O’Toole spoiling for a fight, are even more unlikely to come to the Liberals’ aid. The NDP wishlist seems particularly pathetic because the Liberals already promised a childcare fix in their last party platform in 2019, and employment minister Carla Qualtrough has recently signaled there will be some movement on EI benefits for the self-employed and women in the upcoming throne speech.

Do the NDP regard themselves as a mere ombudsman of the Liberal party—making sure Trudeau delivers on promises he’s already made? Or does the NDP have a unique vision of how Canada could look after its people, a vision better than what the Liberals offer? If the latter, why doesn’t Singh use this moment to highlight the differences between NDP and Liberal visions of the future? The NDP has exciting ideas to reduce inequality with a wealth tax, replace Canada’s patchwork healthcare system with truly universal coverage, strengthen democracy through electoral reform and more. Through their own parliamentary meddling the Liberals have gifted the NDP an opportunity to push to get some of these ideas enacted, or at the very least, to highlight to Canadians that it is the Liberal party that stands in the way of getting these progressive policies adopted. When Singh declines to make these policies a part of his opening bid in the negotiation with the Liberals to prop up Trudeau’s administration he fails both the NDP and Canada’s left more broadly.

How free are we?

Freedom can be seen as the measure of personal agency an individual enjoys within the framework of society. At first glance, it would appear that Canadians enjoy a high degree of freedom since we place very few restrictions on personal rights. However, there is a distinction between having theoretical freedoms and being able to exercise these freedoms in practice.

Freedoms are only meaningful when we have a chance to exercise them and that means having the time to do so. If we look at Maslow’s hierarchy of needs, we can see that time must be allocated towards basic needs before it can be allocated to our self-fulfillment. 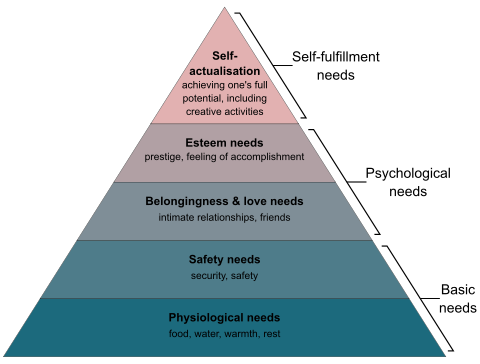 We meet these basic needs by doing work, and a typical Canadian works for at least forty hours a week. Meanwhile, the income earned from a typical job is roughly equivalent to living costs spent on food, housing, and other necessities as evidenced by the fact that nearly half of Canadians are 200 dollars or less away from not being able to pay their bills.

An obvious question here is why people don’t get jobs that pay more. Unfortunately, better paying jobs typically require higher education and attaining this education requires having both the time and the finances to do so. If a person is unable to create savings while they’re expected to work full time, then higher education ends up being outside their reach.

Finally, it’s important to note that a forty-hour week is the expected standard in Canada. Even if one is lucky enough to attain higher education without going into debt they will have a difficult time finding a job that does not demand a lion’s share of their time.

The pattern that we see here is that Canadians are expected to spend the majority of their time doing work in order to meet their basic needs while having little time to spend on their own interests. This is true regardless of the quality of work or the level of education the person is able to obtain. This situation constitutes troubling results for the amount of effective freedom that Canadians enjoy.

There are several ways we could combat this problem. The number of hours in the standard work week is not a law of nature, but rather a social contract that can be renegotiated. Other countries already have a shorter work week than what we enjoy in Canada. For example, France has a 35-hour week, and Finland is even considering a four-day work week. There is no reason why Canadians can’t have a shorter work week as well.

Providing universal guaranteed income is another policy that Canadians should demand. Creating a stronger social safety net would dramatically lower the risk associated with switching careers, starting a businesses, or getting higher education. This would directly lead to increased freedoms for Canadians by creating more opportunities for self-actualization.

Reducing the cost of higher education, or making it free, is another demand that we must put to our politicians. Every Canadian should have the ability to develop their interests without having to worry about incurring a financial burden.

It’s time Canadians started thinking about freedom in practical terms, and that starts with having the freedom to choose how we spend our time.