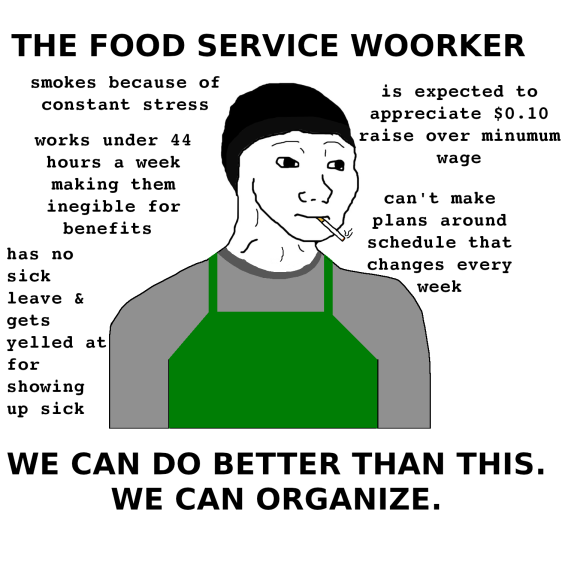 To start, how long have you been making memes for?

I got started around the same time I started taking a serious interest in leftist politics, late 2016. That election was a doozy.

What got you into making and posting memes? Do you just find it fun, or have you always been trying to make some kind of propaganda with the memes you make?

It’s always just been about making funny things to post online to me lol. I mean in the beginning I was mostly dunking on trump as a #resister (I know, cringe) but as I watched the real energy of the movement sapped off by die-hard centrists and starting connecting with more staunchly left-leaning people, having some of their ideas rub off on me, I’ve been trying to more effectively use my work to push revolutionary ideas and highlight social problems.

What were the influences that developed the Woorker idea? Was it just the Wojak format itself that caught your eye, or was there a developing trend of memes that you thought the Woorker would fit into?

There was a conversation in the discord about unionizing entry level workers, and I just thought about some of the experiences I had in my late teens/early 20s working in kitchens and how universal the stress of low paying entry-level work is. Everyone’s gone through it at some point. I picked Wojak though because it’s an easy template to work with and subverting some of the tools used by the alt-right is kinda interesting to me. They’re really good at getting through to people and we on the left could probably take a few notes.

Have you kept much track of the reception to the Woorker meme? Do you usually track how much attention/engagement a meme gets, and if so, do you find that helps you learn how to get better at memes?

The Woorker meme was pretty low effort and I made it specifically for ICD1 to use, so outside of occasional updates through the discord I haven’t been paying too much attention to it. I’m glad people are liking it and it’s been adapted to fit other professions especially by @gv4et (on twitter & instagram). I’ve also noticed my “4/20/69 work week ” meme has been blowing up by other people posting it on twitter and reddit, with one post getting engagements in the low thousands and kinda regret not watermarking it lol, but if it’s got people talking about the ridiculousness of the lack of a livable wage that’s pretty cool

Do you do many drafts or polishing of a meme, or do they usually come out about as good as they’ll get?

I do occasionally workshop an idea in the discord or in a chat on twitter before I post them, getting criticism from other posters, which can be helpful, but more often than not posting memes is pretty time sensitive, so I just close my eyes and post lol

Do you feel like you’re developing a skill as you make more memes? If so, does the feeling of development feel similar to getting better at drawing or writing?

I primarily use GIMP, and it seems like every time I set out to make a new meme I end up exploring a new feature, be it layer masks, or paths, or even just playing around with the filters.

What’s the most important skill that comes with making a meme, in your opinion? Is there a sort of design craft aspect to it, or is it mostly just knowing how to translate a feeling of the moment into a concentrated image?

Lol, lately I’ve been trying to really learn from a couple of the real heavy hitters like @TeenageStepDad and @MemeIndustrial who both have a pretty keen eye for commercial design but being able to quickly represent a mood is really useful

For my own part I’ve rarely felt like the internet is an actual thing I can interact with. Or that if I did interact with it by posting the big flood of voices would just drown me out. Do you find the internet feels different to you now than when you (if ever) weren’t producing content for it?

It can feel kinda daunting inserting yourself in to the middle of a large conversation, but I find it’s easier to jump in to comments and get engaged if I have something made to drop in that’s relevant and often it sparks further conversation.

How has making memes affected your own engagement with content on the internet? Does it feel like you have a more critical eye for content, as if you’re analyzing other craft-work?

Oh definitely. I’m constantly looking at other people’s work trying to figure out how they did certain things, made certain details etc, or what fonts work with what kind of styling etc

Any thoughts about the silliness of it all? Like, I’m interviewing you about the mechanics and theoreticals of making funny/relatable pictures for the internet in the hopes it grabs enough people’s attention to get them thinking about the inherent contradictions of the status quo while also motivating them to help change it. All through an image and joke people will look at for barely more than a second. Does any of that feel off to you, like we’re taking something too seriously? Or is the internet really and truly srs bsns?

We live in a world where a bad tweet from a billionaire can tank stock prices, it’s very absurd. Social media also gives the average person the opportunity to tell politicians and other people with power that their bums stink in a way that hasn’t been available before, so in some ways it’s kinda great. There is definitely a lot of late-stage capitalism hellscape that comes with it, but social media offers the working class ways to connect and organize in ways that have previously been very difficult if not impossible. I think both have a future beyond capitalism.